GEG is a supplier of flash-condensing type and modular geothermal wellhead power plants, delivered on a turnkey basis. Here below we provide an overview on the functionality of a flash steam plant and connected condenser.

The technologies are dry steam, flash steam and binary-cycle power plants. “The type of conversion used depends on the state of the fluid (wheather steam or water) and its temperature.”

“Hydrothermal fluids from geothermal wells that have a temperature of more than 182°C (360°F) can be used in flash plants.” GEG normally requires a temperature of 200°C and more downhole for its solution.

“Fluid is sprayed into a tank held at a much lower pressure than the fluid, causing some of the fluid to rapidly vaporize, or “flash” (please refer to picture 2.8). The vapour then drives a turbine, which drives a generator. If any liquid remains in the tank, it can be flashed again in a second tank to extract even more energy.

Flash power plants exist in single and multiple flash variations. In a single flash plant the liquid dominated brine steam mixture will be flashed in a separator before the dried steam will be fed to the condensing steam turbine.” 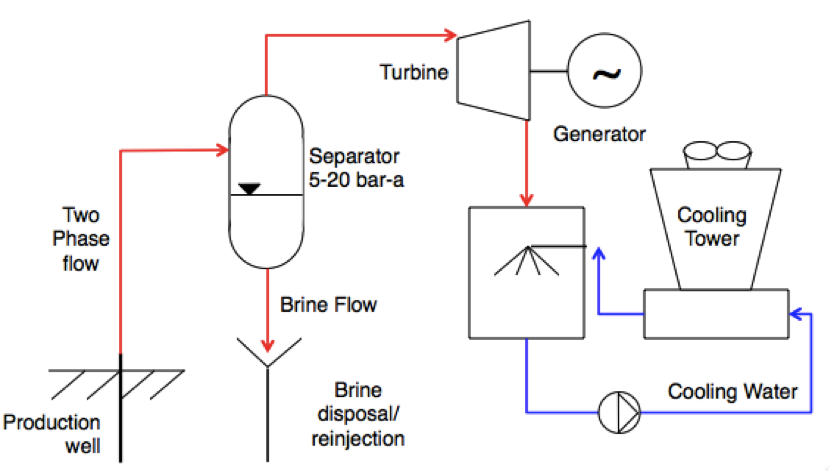 “The main purpose of the condenser is to maximize turbine efficiency by maintaining a proper vacuum by condensing steam, removing dissolved non condensable gases from the condensate and conserving the condensate for re-injection or as feed water for the cooling tower. As the operating pressure of the condenser is lowered (vacuum is increased), the enthalpy drop of the expanding steam in the turbine will also increase. This will increase the amount of available work from the turbine (and thus electrical output).”